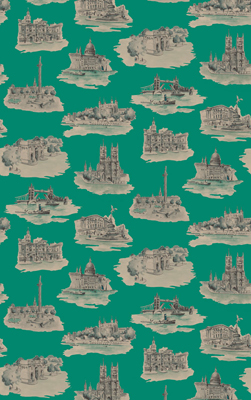 The influence of the Jubilee and the Olympics have produced a mass of London-inspired designs of variable quality. One that will hopefully last beyond 2012 is this London Toile from Boeme.

The 100% linen fabric is digitally printed with scenes of London landmarks, from Nelson's Column to Tower Bridge. It's a romanticised view of the capital, with illustrations that look like they are drawn from early twentieth-century postcards (and certainly a dramatic contrast to the scenes shown in the Timorous Beasties design of the same title).

It's available in four different colourways: jade as shown here, a striking orange or two more muted colours that are perhaps more in keeping with the period illustrations.

Nicoll high back chair from Habitat