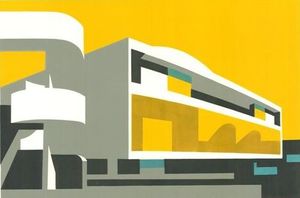 We've featured the destinctive linocut prints of Paul Catherall many times in the past but we couldn't let his Festival II print pass by unnoticed.

This striking print celebrates one of the architectural highlights of London's South Bank, the mid century gem that is the Royal Festival Hall, opened in 1951 to mark the Festival of Britain. When Catherall first released this print in 2009 it sold out almost immediately; this new reissue is not only bigger than it's predecessor but also features the bold, citrus 50s-inspired palate that any mid century design fan will love.

£395 from Culture Label. See the website for more details.

An Embrace of Roses by Woop Studios

Design Classics A to Z print by 67 Inc