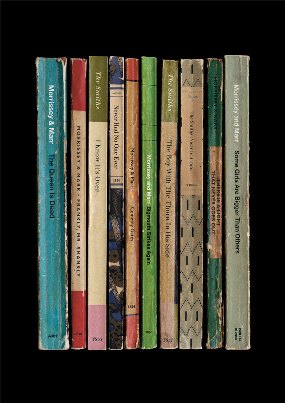 Just as I like the music of The Smiths, it seems I'm equally drawn to art inspired by them, such as StandardDesign's intepretation of their albums as book covers.

The London-based designer has created a print for each of band's major studio albums, that is 'The Smiths', 'Meat Is Murder', 'The Queen Is Dead' and 'Strangeways, Here We Come'. Each one consists of book spines for each track on the album, imaging that Morrissey and Marr had written books instead of music. As you might imagine, the books are an eclectic mix of battered, well-thumbed paperbacks. They cost £12.50 for a print measuring 42 x 29.7cm. Alternatively you can buy all four for £37.50. Similar treatment has also been given to two Joy Division albums and New Order's 'Power, Corruption and Lies'.

On The Move print by Corinne Welch

Crayola Letter Art by The Letteroom