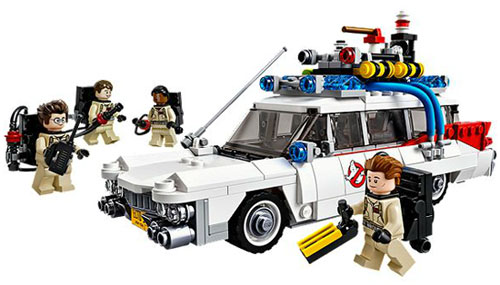 It was promised for sometime this year, so we didn't hold out much hope of it landing before Christmas. However, the Lego Ghostbusters Ecto-1 30th Anniversary Set has actually just hit the shelves and is available to buy right now.

It's pretty much all that was promised, with one possible exception. For your money, you get the movie car of course, along with its paranormal detection equipment, official Ghostbusters logo, a removable roof, a tracking computer and three seats for minifigures.

The pack actually contains four minifigures with proton packs (Peter Venkman, Ray Stantz, Egon Spengler and Winston Zeddemore), with extras including building instructions (obviously), selected images and behind-the-scenes details about the classic movie. All of that is good for ages 10+, although we suspect the target market for this well above the 10-year mark.

You don't get the building that appeared in original promo shots, but maybe that will follow? Regardless of that, the Lego Ghostbusters Ecto-1 30th Anniversary Set is available now, selling for £44.99 online. Magnum P.I. on your mobile phone