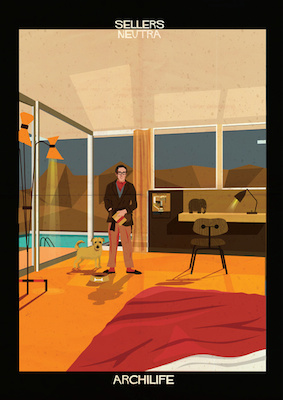 Federico Babina has already given us Archicine prints featuring famous buildings from films and Archiset, in which movie plots were cleverly recreated in buildings. He's found another ingenious way to combine the two in his Archilife print series, which features film stars in famous architect-designed homes.

This new series injects a bit of life into the sometimes sterile-looking interiors of famous designs, albeit a very glamorous life. He's paired up Hollywood stars with key architects so, for example, you get Peter Sellers in Richard Neutra's Kaufmann Desert House or Marlon Brando making himself at comfy in a Frank Lloyd Wright. And very much at home they look too: you can spot Cary Grant ironing a shirt, or Brigitte Bardot toasting marshmallows on her fire.

There's a stellar range of Hollywood stars on display, from Audrey Hepburn to James Dean, and that's matched by the names of the designers featured, including Gerrit Rietveld, Oscar Niemeyer and Mies van der Rohe. 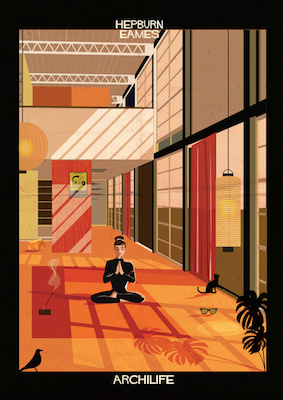 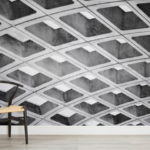