Just when you thought everything form the designers’ archive has been reissued, along pops the Eames Coffee Table by Charles and Ray Eames.

This actually dates back to 1949, produced by Charles and Ray Eames as a unique furnishing piece for their own residence, the legendary Eames House in Pacific Palisades, near Los Angeles.

The surface is the luxurious part (originally covered in gold leaf), matched up with a dowel-leg base, which is a variation of the wooden base found on the Eames Plastic Chairs. Two more of these tables were later produced, but with a marble top.

This re-edition has been developed by Vitra in cooperation with the Eames Office, with the square or rectangular table tops made of palisander veneer, marble or solid American walnut. The base combines black wooden legs with metal cross-struts.

It arrives in retailers’ showrooms from August, but some places are already taking pre-orders, including The Lollipop Shoppe. If you want one, they are priced from £900. 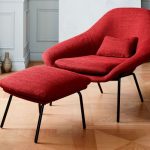 Wish You Were Here cushion by Yukari Sweeney