We have featured vintage examples of the BMW bubble car, but we never expected to see a new one. But at first glance, that’s what you get with the Eagle EG6330K.

Of course, this isn’t a new version of the BMW Isetta from the company itself. This is a new take on the car from a company called Eagle, which is based in China and who seem to specialise in electric vehicles. The EG6330K has just been unveiled by the company at a trade show.

It has a similar look to the 1950s cult classic and a similarly compact design. But there are key differences. For one, the new version is a four-door and four-wheel car. Also, it has a boot at the rear. So still small, but a little more practical. As you would expect from a company that specialises in them, this is an electric vehicle, able to travel up to 120km per charge and with a top speed of 60km/h.

Sadly, the retro exterior doesn’t carry through to the interior. At least, not yet.

That’s about all we know. Will it make it to full production? Will it make it to the UK? These questions will probably be answered during the course of this year. For now, marvel at a rather bizarre retro car that might just have wide enough appeal to make the grade.

Note that it also has the look of the classic 1960s Fiat 600D Multipla. A marriage of two period designs. 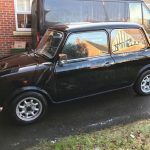