Of course, The Beatles went to India in the late 1960s, but the press weren’t allowed to follow them. Which makes The Beatles In India by Paul Saltzman all the more fascinating.

If you didn’t know, back in 1968 The Beatles went to Rishikesh in India to study transcendental meditation, and write some music. No photographers or press were allowed in by Maharishi Mahesh Yogi, but The Beatles didn’t have a problem with fellow visitor Paul Saltzman snapping away during his time there. The result is pretty much what you have in the new version of this book. Essentially the only record of the band’s time there.

Being a fellow visitor rather than an official photographer resulted in more casual and intimate photos of the band just two years before the split, the pick of which are captured here alongside a wide-ranging narrative by Saltzman himself. Everything from the story of how Dear Prudence came to be through to George Harrison’s description of the first time he picked up a sitar.

104 and available to pre-order now ahead of the February release, it’s available for £25 in hardback form.

7-inch single iPod cases – made from your own 45 record 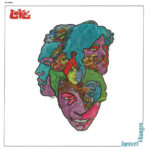