Not just another storytelling, Tales of The Smiths by Con Chrisoulis is a graphic novel about the band’s early years.

This is actually quite a long running project, with much of the contents of the book serialised online daily between 2012 and 2014. Fast forward a few years and Omnibus Press has decided to collect those comic strips together and publish them into a single volume, one that comes in at a whopping 464 pages and comes out on 22nd March. But you can pre-order the book now.

Not the expected content either. Like the recent England Is Mine movie (which is also available to buy now), the book focuses on the early years of the band and the people involved.

In fact, it is described as a ‘retelling’ of the band members’ teenage years, before the group was famous, and includes digressions about their influences (the New York Dolls, Nico, Sex Pistols, NY punk, Patti Smith, and so on) and the times in which they were growing up.

The story reaches its climax with the meeting of Morrissey and Marr, the formation of the band in 1982 and their first gig as The Smiths.

There is also an introduction by Simon Wolstencroft, the former drummer with The Fall and Patrol which featured Andy Rourke and Johnny Marr.

If you are a fan of the band, this is probably already on your shopping list. But if you missed it or are simply intrigued by the idea of a Smiths graphic novel, the book is available to order now for £25.

7-inch single iPod cases – made from your own 45 record 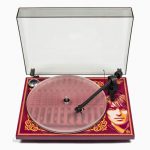