I think you will have to look hard to find something that compares to this immaculate 1970 Volkswagen Karmann Ghia car on eBay.

The car is being sold via eBay as either a classified or a ‘best offer’. Either way, someone will get something rather special if they secure this one.

The Karmann Ghia was essentially a sports car or coupe, produced by Volkswagen from the 1950s into the early 1970s, with this obviously being one of the later models. It was based around the inner workings of the Beetle, but with styling far removed from it, the work of Luigi Segre and Wilhelm Karmann amongst others.

It is a thing of beauty and often cited as one of the most stylish cars ever made. it was heavily produced over the decades, with a selection always available to buy. But few as attractive as this example.

The one here is a left-hand drive imported from California, where the dry climate no doubt helped it maintain its condition. According to the seller, there is absolutely no rust. But that’s only part of the story.

The car, which has had just one UK owner, has recently undergone a full respray and has had a full engine rebuild, as well as a reconditioned gearbox fitted plus an uprated carb.

No mention of any work on the interior, so I can only presume that it has been well preserved over the years. It really is quite stunning in its originality.

A timeless vehicle, but one that would still work as a regular drive and / or a practical classic.

Downside? That’s likely to be the price. The asking price of this car is £19,995, although the seller will take a ‘best offer’ if you want to go in lower. 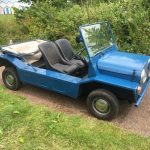