Of course it looks like a speedo. That’s because this is a Brisa Volkswagen T1 bus speedometer alarm clock.

Officially licensed too, which might explain the rather high price tag. At least, high when compared to a standard alarm clock. I’ll come to that in a moment.

But for now, let’s talk about the design, which is based on the original VW T1 Bus speedometer. The clock face as well as the outer ring are modelled after the original dial, while the rear of the clock is the original petrol cap, but in this case made of chromed-plated steel.

Of course, it works like any other clock, with an alarm feature via a button on top of the clock, which turns that alarm on and off. One last thing, you will need an AA battery for power, which isn’t included.

What is included is the metal gift tin, which makes it more appealing if you want to give it as a gift. 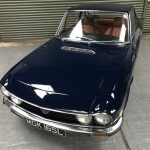