Act quickly if you want to secure a pair of these Adidas City Series Brussels trainers, as they will sell out.

Yes, that’s what you need to do to secure a pair of these shoes, which will be in seriously short supply when they hit the shelves. On the plus side, the reissue of the Brussels (aka the Brussel) will be across several retailers rather than being exclusive to just one. So the odds of you getting a pair are strong if you are around tonight.

The exact time of launch is 11pm on 1st February 2019, with a couple of retailers already confirming sales. Those are linked at the bottom of the page.

As for the shoe itself, this is a replica of the original 1970s City Series release, one that hasn’t been seen in retailers for some years. Certainly not in its original form.

That means a black suede upper with orange leather stripes and heel tab, along with a ridged tongue and trademark gum sole (which is natural rather than the later black sole). The Brussel name on the side of the shoe in gold finishes things off.

These are available to buy now at the End Clothing website for £89. 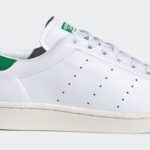