Another archive reissue, this Timex x Todd Snyder Mid Century Watch is now on the shelves.

At least, it’s on the shelves of sole stockist Todd Snyder right now. If you have been following these reissues, you’ll know that Todd Snyder has teamed up with Timex to bring back archive designs with a tweak here and there.

In the past, that has included the Mod Watch, the Beekman Watch and more recently, the Blackjack Watch. All pulled from the past and reissued in the present for people who like the idea of something new-but-vintage on their wrists. The latest instalment is no different.

The Mid Century Watch is the kind of timepiece you imagine on the wrist of someone from the Mad Men cast. Classic, but not without style. In fact, the original that inspired this one is actually later than that, based on a watch from 1977 that was spotted on the wrist of a Timex employee.

Saying that, I suspect the style of Timex men’s watches didn’t carry much in 15 or so years.

The look is said to be faithful to that vintage watch, but upgraded with a stainless steel case and day/date quartz movement for improved accuracy. It also has an acrylic crystal dome, leather strap and water resistance up to 30 metres.

You can get it in a black sort brown colour scheme, each selling for $158. Note that the watch does ship worldwide.

Titanic DNA watch – made from bits of the old ship 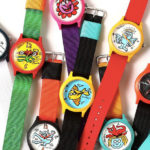