Skip to content
34shares
Note all articles are independently researched and written by myself. However, if you buy via one of the links it may be an affiliate and I may earn a small commission.

If the BMW variations don’t cut it, you might like the look of this restored 30th anniversary Austin Mini on eBay.

This obviously isn’t a 1960s model, as you can see from the badging. This is an anniversary model, one that celebrated 30 years of the classic small car being on the road.

That year was 1989 and the Mini 30 was a limited edition, with this one being in cherry red. But it isn’t something that has been stored in a garage or barn for years. The spotless condition of this Mini is down to a restoration job.

It is described by the seller as ‘an expensive and sympathetic restoration’, with a lengthy list of work carried out. I’ll give you the brief highlights.

This Mini was stripped to its bare shell, the floor repaired as needed, new sills and jacking points were fitted, some panels were replaced, the bonnet was replaced and both doors were re-skinned.

The car was repainted, cavity wax-oiled and wax -sealed underneath. It also got a new roof lining, seat base repairs, an overhaul of the brakes plus many more jobs, right down to a replacement exhaust system, refurbishing the wheel rims and adding in some new wiper blades.

Of course, the engine was overhauled too and the gearbox rebuilt. So it should drive as you expect an old Mini to drive.

That work was done about three years ago and the garage has since stored it, although it has been through a recent MOT, should that be a worry.

The finished car is said to be ‘spotlessly clean in every detail’ and party much show condition. If you like the idea of driving it around this summer, the Mini 30 is being sold via eBay with a price of £6,995. 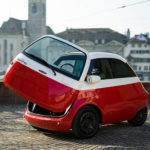