Skip to content
31shares
Note all articles are independently researched and written by myself. However, if you buy via one of the links it may be an affiliate and I may earn a small commission.

Take your pick from two refurbished 1960s Dansette Major Deluxe record players on eBay, both with a low starting price.

Whether they have a low-end price is a different thing. You will have to wait a couple more days to find out, but you can always have a bid on either on the off-chance that you get a bargain.

As I said, both the same design, one dating from 1961 and one from 1962. Both have been refurbished by the same seller and as such, both are likely to be similar in terms of inner workings and finish.

Well, one is red and white and the other black and white, which is the main difference. Both have been fully restored mechanically and are described as being in ‘as new working order’.

Both of the record players are covered in the original rexine finish and both use a BSR UA14 turntable, which plays all records at all speeds, with the option to stack up to eight records at a time.

The gold front grille covers the internal speaker and two controls are mounted on them, one being a combined on/off volume and the other for the tone. Note also that the Dansette badge on the front lights up when the players are switched on.

As you would expect, both have been stripped and cleaned inside and out, the valve amplifiers have been serviced, the correct cartridges fitted and new wiring used for safety. In short, the two players here are obviously vintage, but with a finish and inner workings that could pass for new.

A proper auction for both players too, with the current asking price at £4.99 for each one. 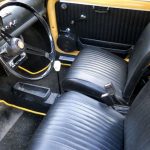