Fancy reliving the 1980s? A good starting point would be a pair of these Puma x Def Jam Clyde trainers, which are a limited edition.

Why? Well, this is a shoe of an era reworked to feature a record label that broke cover at around the same time.

Ok, the Clyde isn’t a 1980s shoe. It has been a regular reissue since the 1970s, with the original dating back to 1973. This particular style was a tribute to Walt ‘Clyde’ Frazier, who a seven-time all-star at the New York Knicks (if you don’t happen to be a fan of basketball).

But as a style, it was big news in the 1980s, particularly amongst B-Boys and the hip-hop circuit in general in its early days. A time when the Def jam label was just starting up. In fact, this is released to coincide with Def Jam’s 35th anniversary.

This is your classic, low-cut Clyde in white leather and with red detailing, but with enough subtle changes to get you noticed. Basically, the Def Jam logo stamped on the tongue an extra splash of colour and Def Jam boldly printed on the inner sole.

Just enough without destroying a classic look. They land on Friday 6th March and sell for £75. Expect to find them at Size? and the Puma website. 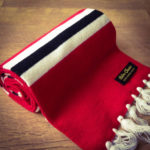