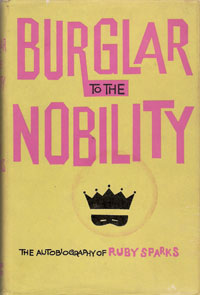 Every generation has its minor celebrities – famous for 15 minutes, then off back to obscurity. In the 1940s, that was Ruby Sparks – and Burglar To The Nobility was his story.

Ruby Sparks was a villain, pure and simple. From the earlist days as a child thief, through to robbery with a horse and cart and later widespread notoriety – Ruby was the first man to do a "smash and grab" in Britain and the first to use a getaway car. And while we’re onto his achievements. he was also the first man to escape from Dartmoor prison (he also started the infamous riot there and escaped from Strangeways in a suit made out of an old mail bag).

Played out like an Ealing Comedy with added violence, Burglar To The Nobility is a cracking read. Gritty realism, amusing anecdotes, some pictures of the time and a "crime doesn’t pay" mesaage at the end. Not to mention a great period cover.

Cost £1 and worth every penny.

Find a copy on the Abebooks booksellers network

Bond By Design: The Art of the James Bond Films

4 thoughts on “Junkshop Gem: Burglar To The Nobility”