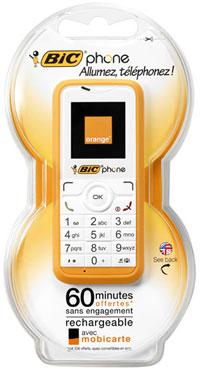 You could argue that the Bic disposable razor is a design classic – introduced in 1974, that orange and white razor is still in production today. And just out in France is a mobile phone using the same design – the Bic phone.

Keeping that 1970s colour scheme, the actual phone is designed for the convenience market, offering a fully-charged phone (made by Alcatel), 10 minutes of calls on the Orange network (with an option to register for more), text messaging and an FM radio.

So pretty basic, but pretty cool looking in its own way. The phone will initially be launched in France, where you can pick it up for 49 Euros (which is around £38).