New York in the ’70s by Allan Tannenbaum 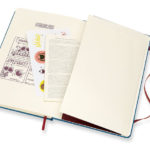