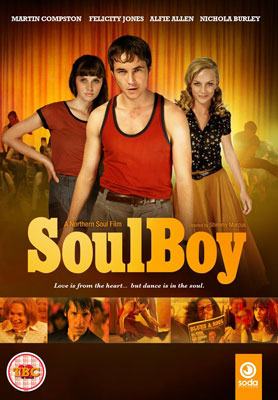 Some months back, we featured a new northern soul movie going by the name of Soulboy, which got a limited UK cinema release and a very positive reaction from cinema-goers and critics alike. If you missed it, you'll be pleased to know that Soulboy is about to be released on DVD in the UK.

It's a typical coming of age movie, with 17-year-old Joe McCain finding his way in the world of the 1970s – as well as discovering the world of northern soul via the allnighters at the Wigan Casino.

The DVD is released on January 3rd 2011, with the addition of some making of featurettes as bonus material. Amazon is discounting heavily, with a copy available on pre-order for just £7.99.