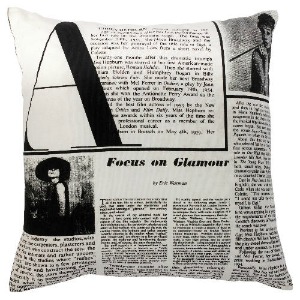 Tesco isn't necessarily the first place you'd think of for home accessories but if you want a piece of cheap chic, check out the Audrey newspaper cushion from their F&F home range.

As you might have deduced from the name, this cushion is named in honour of Audrey Hepburn. Rather than reproduce the iconic Breakfast at Tiffany's image, they've gone for something else – namely a retro newspaper print that celebrates the glamour of the film star.

The cushion is made from polyester, so I'm not convinced it's something Ms. Hepburn would have approved of. Nevertheless, there's no denying the cheap part of the chic: the cushion costs just £9.