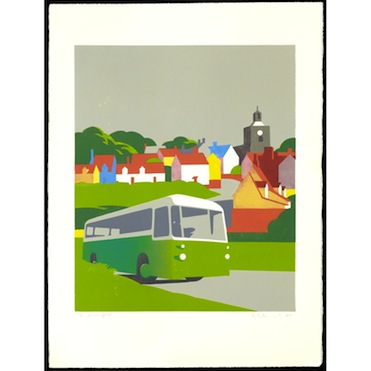 This Finchingfield print by Paul Catherall celebrates the delights of escaping the city and heading into the countryside.

More specificially, it celebrates Green Line coaches who were formed in the 1930s with the aim of serving Londoners who wanted to do just that. It's part of a new range at the London Transport museum inspired by the coaches.

The lino print is definitely one of the highlights of the range. It shows a 1951 coach in an idyllic British scene and is executed in Catherall's distinctive style which has been used on many other London scenes, as well as London Transport posters themselves.

Cassette culture: To the Tune and Back Notecard Set