Music fans who still pine for the Wigan Casino or The Haçienda should check out the new Lost Destination prints by Dorothy.

It was only last week we featured their musically-inspired Road to Nowhere prints, and now we've discovered they've expanded our favourite Lost Destination range too. And what could be more fitting of examples of 20th-century architecture that have been loved and lost than music venues?

These four releases, echoing classic travel posters, celebrate the The Haçienda, demolished in 2002, and Northern Soul favourite, the Wigan Casino, which closed its doors in 1981. There are also prints commemorating the London Astoria, closed in 2009, and jazz, blues and rock venue, the Eel Pie Island Hotel, destroyed in a fire in 1971.

Sure to evoke a few memories, whatever your age or musical preference, the open edition prints are priced at £35 each.

Order them from Dorothy. 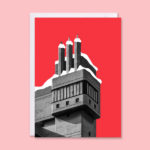 Brutalist architecture Christmas cards by In From The Storm