No, we aren’t referring to it as a ‘Thing’, that was actually the name used when the vehicle was sold in the USA. In the UK, it was better known as the Volkswagen Trekker 181.

The 181 was a two-wheel drive, four-door, convertible vehicle intended for off-road use and produced from 1968 to 1983. This example of a vehicle initially designed for the military dates back to 1969.

It’s an interesting one, perhaps a good ‘weekend’ vehicle and project and you suspect, a fun thing to use. It also uses many parts from classic VW cars, so spares should be fairly easy to pick up. But do your own research on that one rather than take our word for it.

Price is definitely on its side. Right now it stands at £435. 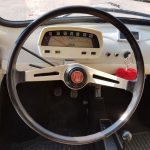