Now this is so cool. Not just that, this Toyota Sport 800 Coupe on eBay is rather a rare beast too.

The car went into production back in 1965, with this one dating to 1968, a year before the car stopped being made by Toyota. The company claims only 10 per cent of the vehicles produced survive, hence the rarity value.

This particular model has been shipped to the UK from its native Japan where it covered around 46,866 from new. It is described as being in ‘extremely good original condition’, with the body and interior in ‘unrestored but very good condition’ and the engine ‘complete and in very good condition’.

There is history on the vehicle at the Toyota site and more images and details on the listing itself. A very special car, but one that doesn’t come cheap at £39.950. Saying that, you can put in an offer if you want to pay less. 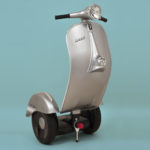