We have featured a lot of planters of late, but in terms of affordability, I think the Hakuun retro planters at Made.

Of course, there is plenty of competition in this field. Of late, I have featured the likes of the cement planters at Next, the Florian midcentury planters at La Redoute and the brass planters at Audenza, all of which are desirable in their own way. But as I said, the ones at Made have price on their side.

Not that there’s a problem with the design. Far from it. We love those terrazzo pots, as well as the wooden frames that support them. Not only that, you actually get a set of two planters here rather than one, which makes it even better value.

The two planters are different sizes, the first being 54cm high and the second 42cm high, which means they should work well together as a display if you want some greenery in the home.

They are available now, with a pair selling for £49. 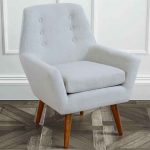 Vivienne midcentury-style armchair at My Furniture

Wallpaper From The 70s