Another limited edition Adidas reissue, with the Adidas Rom City Series trainers back on the shelves this week.

The Rom isn’t as rare as some of the City Series shoes. In fact, it was reissued as recently as 2012. I say recently, but that was seven years ago now! But you get my point. You might well have an old pair at the back of the wardrobe or cupboard.

If you don’t, good news as these are out this week and across a number of retailers rather than being exclusive to just one. So you should be able to pick up a pair if you want one. After all, there were plenty of the Brussels available, with some of those still available to buy now.

The Rom has actually been doing the rounds as far back as the 1960s, but the version we tend to know is the one from the 1970s, which is the version this reissue is based on.

Created as an all-round training shoe back in the day, the Rom is best known for having an EVA rubber sole unit along with a gum outsole and some chunky grips on the sole for added traction.

The upper is typical Adidas of the era, so a leather finish, contrasting leather stripes, suede overlays and the gold foil branding to the side with the Rom name. Adidas logos on the tongue and heel finish things off.

For an added period touch, check out the textured vintage style tongue and the classic white and blue colourway.

The pricing is likely to be the same as the Brussels, so save yourself around £89. The good news is that they land around payday, with availability from 11pm on Friday 1st March 2019.

Demand is likely to be high, but as I said, there should be plenty of stock to go round if you act fairly quickly. Retailers with stock include the Adidas official store, End Clothing, Size? or Hip Store to name just a few. 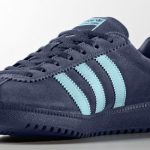 Adidas Hamburg trainers back in a white leather finish