A hugely influential design and a great example of the 1960s Dieter Rams-designed Braun RT2 radio on eBay.

The Braun RT20 is something of a design classic, but it was produced as far back as between 1961 and 1964 and with that in mind, time might not have been kind to the majority of examples offered for sale. Not so this one.

I think this is the best example of an RT2 I have ever seen. Judging by the photos (which is all I can go off), this RT2 is pretty much immaculate.

In fact, the seller describes this as being in ‘collector’ condition. Of course, i is full functionality and with the original switch panel looking like new. This is quite something. I’m also trying to see marks on the wooden casing, which is usually where the damage is, but again, I’m not seeing any. If you can, let me know, but at first glance, it seems damage-free.

That’s perhaps because the case has been ‘wet sanded’ and resealed, hence the ‘as new’ look it has. In fact, the entire unit has been overhauled both technically and cosmetically before being offered for sale and that front panel has been sandblasted and repainted in the original shade. The original letting was also applied using a ‘complex’ screen printing process.

Inside, everything has been overhauled, with faulty and worn parts replaced and the illumination behind the station band also renewed. The radio works as you would expect, but the unit now has an iPod connection cable includes should you want to use it as a speaker for your portable device. Nice idea.

The downside, with all that in mind, is that there is a lot of interest in the RT20. But even allowing for that, the price doesn’t seem too high as things stand. Sold out of Germany (but willing to ship around Europe), the budding for this RT20 radio is up to £411.78 with no reserve. Not bad for a design classic in almost perfect condition. 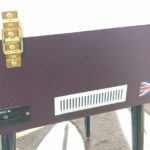