Haven’t mentioned one of these in a while, so do check out this Nissan Figaro in emerald green on eBay, which looks in excellent condition.

I think you probably know all about the Nissan Figaro, but for those of you who don’t, let me add in a bit of background about the car.

In fact, I covered Nissan’s retro car range as far back as 2006, which was probably the first thing I ever blogged on here. So do check out that vintage article if you want to, all the details still apply today.

But to sum up, the Figaro was one of four retro cars produced by Nissan in the late 1980s and for a limited period. They were known as the Pike cars and included the Figaro, as well as the Pao, Be-1 and the S-Cargo, which was a van. If you want to know about the rest, have a read of that article above.

The Figaro was the most popular and there was actually a lottery to get one in Japan. Despite that. the car was imported quite significantly into this country and is something of a cult car today. A manageable classic too, as the mechanics are based on the popular Nissan Micra.

That’s under the bonnet. The car itself is all about the retro looks, inside and out. A slightly sporty number, it’s a great car for summer with its removable roof and is a car that always catches the eye on the road. The vintage-style panel inside is a rather wonderful thing too. That’s probably the hardest bit to look after. Getting spares for the ‘retro’ bits can be pricey.

Thankfully the one here is that lovely emerald green and white finish looks to be in excellent condition. Dating back to 1991 and imported into the UK in 2006 and used sparingly since.

According to the seller, the body has the ‘odd age related mark’ and a total mileage of 69,362 considering the age. The seller adds that it runs well too.

Not everything is vintage, with the Figaro fitted with electric windows and a radio cassette with single disc CD player, although it is pointed out that the radio does not tune in to UK channels. However, the disc player and cassette work fine and there is also an Aux lead to use your phone or another device for music.

The interior is described as ‘really nice’, the back seats ‘look unused’ and there is ‘no wear to either of the front seats’. The roof is also ‘in good order’ and ‘easy to operate’. Finally, all the chrome work is ‘good’. 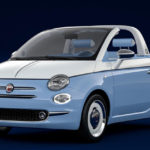 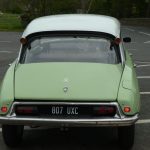