This certainly isn’t cheap, but the retro Wooden Turntable record player by Harri Koskinen is a thing of beauty.

That’s one of the selling points here. The other being the quality of this as a record player too. The music side isn’t just an afterthought, it is key to the whole piece.

This is all about minimalism for the midcentury modern home. Once upon a time, record player consoles were big, bulky things and often for good reason. They included storage, possibly a radio and almost certainly speakers. It all added up and units were as big as sideboards. Sometimes bigger.

Harri Koskinen has gone against that, keeping the midcentury modern look and feel, but stripping things down to their basics. That adds up to the console in oak, the record player, controls and per-amplifier.

The oak frame has been produced in collaboration with a professional woodworker, which holds a Pro-Ject Audio Elemental record player and MaiA Pre preamplifier, with the option of listening to music via headphones or active speakers.

If you want one of these record players then you will need to find £3,642. Presumably, because this is a design statement and a piece of furniture as well as just another record player. Regardless of the price, this is a stunning thing to have in your home.

Find out more at the Finnish Design Shop website

Plus Deck – a cassette deck for your PC 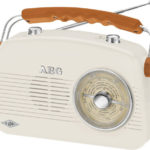