Unlikely to be on the shelves long, so make sure you get in early for these Adidas Munchen City Series trainers.

Updated: The Adidas Munchen is now available in all sizes at the Size? website, but likely to sell out quickly.

Yes, another classic Adidas reissue and another rarity to scramble for at the end of the day. This day in fact, so you might want to check your bank balance and have your bank card handy.

That’s if you can get a pair. I don’t know how rare these will be, but I am suspecting the worst. We got lucky with quantities of the recent Adidas Japan and Adidas Paris, both of which are still available in some sizes even now. But that’s not always the case.

Some reissues fly out in minutes and my gut feeling is that this will be one such occasion. Perhaps expect the worst, hope for the best and don’t go to bed too early tonight. Do that and you might get lucky.

If you do, you’ll get a smart-looking and rather rare piece of sportswear. This is a strong and timeless look, a shoe that’s something of a calling card for the City Series range.

But this also a rarity. A design that is a one-to-one reissue of a Japanese-produced 1980s design straight out of the Adidas archive. A niche release and as such, unlikely to repeated anytime soon.

As for the design, the Munchen has that City Series look, but this time with a royal blue finish for the suede. You also get some white contrast detailing, a rubber outsole and the Munchen name to the side in gold.

If you want a pair, expect these to go on sale between 10 pm and 11 pm tonight (Friday 16th October) and expect to pay something like £85 for a pair.

Where from? Well, regular sellers of these limited editions tend to include End Clothing, Hip Store, Size? or the official Adidas website. 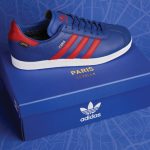