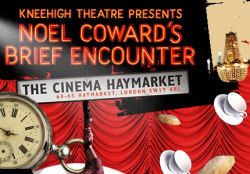 The classic 1946 film, Brief Encounter premiered at the cinema on the Haymarket in London and now it is making a return to that same venue, but as a stage play.

This production will switch between theatre and film, combining Noel Coward’s original stage play Still Life and the screenplay of Brief Encounter. The story involves the lives and loves of three couples played out in a station tearoom.

As well as the chance to see this classic tale on stage, this is also an opportunity to see the Haymarket venue being used as theatre. When the venue opened in 1927 it was suitable for both film and theatre shows, but gradually film began to dominate its repertoire and it became a three screen cinema in 1979.

The show previews from 2 February until 22 June and tickets are being offered at a discounted rate for the first month. For further information visit the website www.seebriefencounter.com