I know, we just did a round-up of Nintendo for the home and something else was bound to come along. That ‘something’ is the new Game Boy Alarm Clock.

This is actually officially licensed Nintendo merchandise, which isn’t always the case when it comes to design inspired by the brand’s classic consoles. I would probably go as far to say rarely the case. In fact, I thought this was anything but official. It has the look of a mad bedroom project brought to life online.

But official it is and available to buy right now. Of course, this is pretty much a first-generation Nintendo Game Boy, albeit without the option to slip in the cartridge of your choice for some retro gaming heaven on the move.

What you do get is a screen telling you yore date and the time, as well as the option to set an alarm – and not just any alarm. This alarm clock wakes you up with the sound of the Super Mario Land game. Nice.

It stands up with the aid of some feet (which are removable) and is powered by 2x AA batteries (not included), which are likely to last longer than the ones in an original Game Boy during a full-on Tetris session. 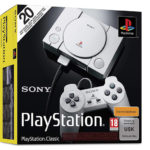