We don’t cover bathrooms much because there isn’t much outside the norm in that particular space. But the Vinyl bathroom units by Olympia Ceramica are definitely a departure, inspired by the record deck.

They are incredibly striking too, as well as being practical pieces for your bathroom too. That’s right, the aren’t just for show.

But what they are is a series of freestanding bathroom / sink units from Olympia Ceramica, specifically the work of artistic director Gianluca Paludi, who was inspired by DJ decks and DJ consoles from the 1970s. For one of these and never be afraid to show someone your bathroom again. In fact, encourage them up there. Just don;t let them stick one of your LPs on.

Yes, the wooden based and recessed sink basin with vinyl design at the bottom might look like the real thing, but it’s obviously for washing your hands rather than spinning your discs. Saying that, there is music built into these units, with a Bluetooth speaker cleverly built in.

But away from the music, the arm and stylus is actually your tap, with the volume controls actually controlling the water flow and temperature. Everything here has a function.

Ok, the LED mirror that looks like an audio equaliser just adds to the theatre, but outside of that it is pure ’sink’.

Variations on the theme have been shown off by Olympia Ceramica, with the pick of them shown on the page here. The good news is that each one will be available to buy, the bad news is that they aren’t quite ready for the shelves just yet. Keep an eye on the maker’s site for that and the price. In terms of the latter, we would guess these would be at a premium level. 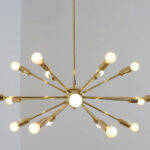