It looks like the real deal, but the Sony 40th anniversary Walkman isn’t quite as authentic as you might think to look at the image.

This is the headline – it doesn’t play cassette tapes. That’s either a good thing or a bad thing depending on the number of cassettes you still have stashed away in a cupboard. For me personally, it’s a very bad thing. But if you have embraced the digital age and just want the look of a vintage Walkman, then this could be the audio player for you.

The ‘look’ is based on a soft case, a cassette interface and a screensaver, all of which combine to give the look of a vintage Walkman. So it looks like the real deal even if it isn’t eating up your old tapes.

But beneath that retro exterior is a modern-era player. The NW-A100TPS (that’s the official name) is an Android-powered music player with a 3.6-inch HD display, a USB Type-C port for charging, up to 26 hours of battery life when charged, Wi-Fi connectivity, support for PCM, FLAC, AIFF, DCD audio (plus audio upscaling for audio upscaling for MP3), 16GB of storage and Bluetooth connectivity for your headphones.

The issue really is whether you are willing to pay £400 for the novelty of having a player that looks like a Walkman when your phone plays tunes anyway. If you are happy to do that, this retro Walkman will be available from November.

If you want something that takes cassettes and doesn’t break the bank, have a look at the upcoming It’s OK portable cassette player instead. 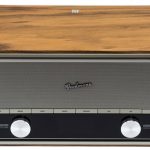