You really will have to love Primal Scream a lot to justify picking up the 30th Anniversary Screamadelica Fender Stratocaster.

Not there is anything wrong with that. Screamadelica is a classic album and pretty much everything else the band has done since its inception is worth checking out. Even the ‘jangly’ indie-pop of the early days.

But the cherry on top of the band’s back catalogue is the indie/dance crossover that is Screamadelica and there is plenty out there to celebrate it. From TV documentaries to vinyl reissues. But I would hazard a guess that THIS is the most expensive thing out there.

The 1991 album is celebrating 30 years, hence so much attention right now and Fender has decided to produce this limited edition Screamadelica 30th Anniversary Stratocaster to commemorate its recording and release. And why not?

I’m not sure how limited, but I would guess that not many are being made. So there is the potential of this being a future collector’s item as well as a particularly good guitar to play and – dare I say it – an amazing piece of interior design too.

The all-over graphic can’t fail to catch the eye, with the red, yellow and blue album art matching up with the pickguard, pickup covers and knobs.

So quite the design and if you are a fan, this is something you are likely to want. Especially if you know how to play it. But you might have to check the bank balance and piggy bank for one as it sells for £1,229. 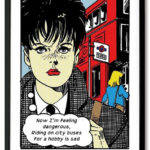