Nice pun, but an appropriate one as Aladdin Rain is a David Bowie-inspired umbrella by London Undercover.

Amazingly, this isn’t the first time that David Bowie has inspired an umbrella. Back in 2016 I spotted a range by Kayci Wheatley using similar imagery, but with a very different end product.

Of course, the design chosen is based on the classic Aladdin Sane album (which is why the pun works), but in a more subtle way than the ones I mentioned previously. The ‘lightning’ design is on the inside of the umbrella’s canopy, with a reverse of black.

Of course, this is a seriously high-end umbrella too. This isn’t the kind of item to fold on you with the slightest gust. London Undercover has hand crafted this umbrella from beech wood and made the frame with industrial strength steel. Finishing touches include a metal runner and a ‘tip cup’, with the length of the umbrella being around 90cm.

So built to last and you would hope so too considering the price. This umbrella sells for £150 online. No news of further designs, but I suspect a Blackstar one would be quite eye-catching. 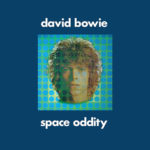